Over six years: a series of ten magazines; a blog; a book and hundreds of publicity photos.

For the 50 years until the 1970s east Manchester was a manufacturing powerhouse: engines, chemicals, machinery, pumps, aircraft. Jobs were plentiful. The place teemed with people. Pubs were on every street corner.

But the decline was slow and deep. Revival attempts came and went, until, at the end of the 1990s, the 10-year New Deal for Communities programme was established, followed by the creation of regeneration company, New East Manchester Ltd.

Between 2004-10 I was commissioned by these regeneration agencies to document the reversal of the area’s fortunes.

In March 2010 I published Reclaiming East Manchester: Ten Years of Resident-led Regeneration, a book commissioned to tell the story of the New Deal for Communities programme. It includes dozens of interviews with residents and regeneration officers to offer a forthright account of the renewal process. Based on a timeline with quotes, facts and over 250 images, the book will resonate with others following a similar journey as well as professionals and academics observing urban regeneration.

Between June 2009 and October 2010 I compiled the thisiseast.com blog. It’s much like the East magazines (see below) from which it has developed: telling the stories of east Manchester’s regeneration through the people who live and work there.

Between 2005-2009 I produced 10 issues of the 28-page, large format East magazine with images and articles covering housing, the local environment, health, community issues, and jobs. 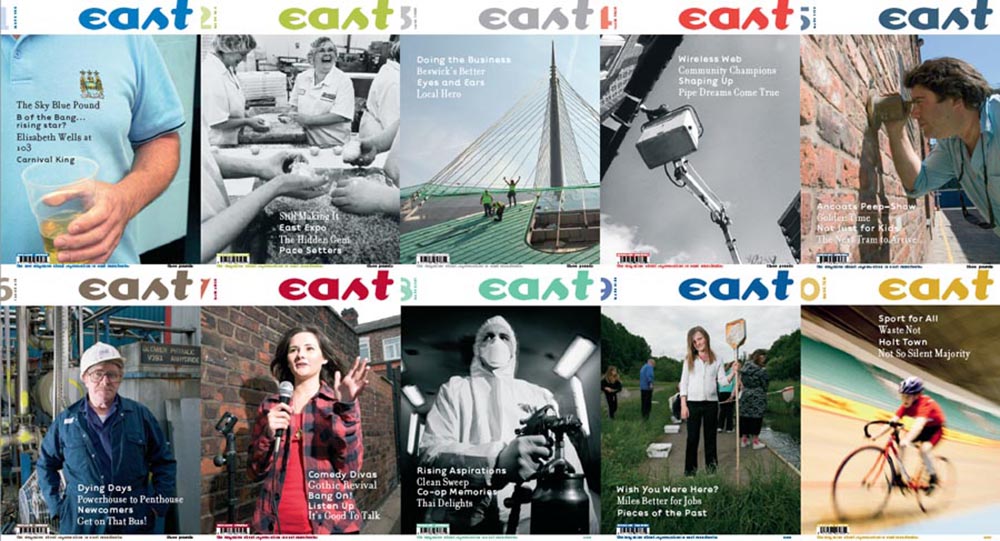 In October 2005, a spread from the first issue of East won the ‘Best Use of Image’ Award at the 2005 SUN [Shot Up North] Awards. In March 2008, East won the magazine category in the McNaughton Design and Print Awards and in 2009 was shortlisted for a second time in the media category of the NW Business Environment Awards.
East was designed by Axis Graphic Design